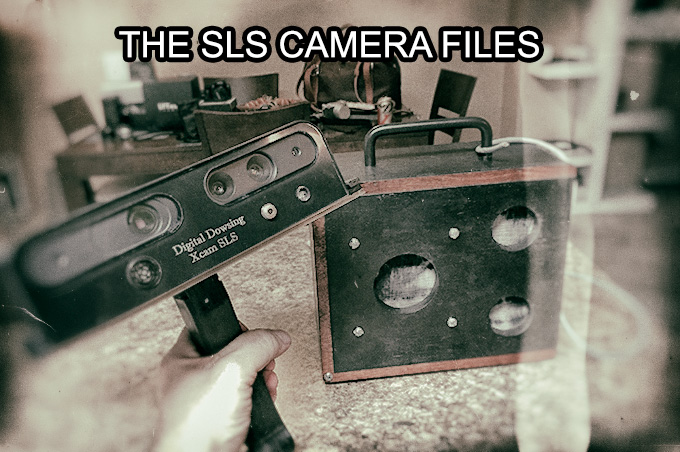 So here we are in 2014 and Ghost Hunting has not even peaked yet. Every year I see more and more people get into this and I feel it is in its INFANCY. Yes, even with TV shows all over the place promoting ghosts and ghost hunting, most who watch these shows see it as fake or entertainment only. Most do not realize that YES, this is a real phenomenon and spirits are not only real, they exist and can indeed leave us messages that are audible. Using various devices such as spirit boxes, Ovilus devices or plain old EVP recordings spirits can talk to us. For some of us, we hear them every day with our own ears. Those in my house do when they open up to it and it is an amazing thing.

But what about SEEING these spirits? So far, nothing has been invented to really see where they are. It is a VERY rare thing indeed to have a REAL apparition show up on video. In fact, I have never in my life seen a real piece of footage with a real spirit or apparition. What I mean by that is, I have never seen a piece of video footage showing a ghost or spirit in the shape of a person, that was legitimate. I have personally  SEEN spirits on 4 occasions now but have never been able to record them as they are simply not visible to standard cameras or even full spectrum cameras. We can record intelligent orbs and balls of light (that are NOT dust) of varying color but not human spirit forms.

In the past few years many have found by accident that an Xbox Kinect camera was picking up “anomalies” around them in their house. The camera would map the player but for some, they were finding another human form being mapped behind them or near them. When this happened others started to experiment and see if it was a fluke or something very real to it..for detecting and seeing spirits.

When I heard about it I had no interest as it could be ANYTHING causing this. A glitch in the camera or software or any number of reasons. Besides, I am not a gamer anymore so was not interested in buying a full fledges cumbersome Xbox setup to test it.

Time went by and I saw that Bill Chapel of Digital Dowsing was releasing a new improved camera that he designed, all in a handheld portable format. It used similar technology (SLS Camera) as the kinect but was not a kinect. I saw some of his experiments using it and was intrigued. When it became available for pre-order I was one of the 1st to get in on it and spent $1000 to order my own SLS Camera system.

A few weeks later it arrived and during my 1st use I thought “Did I waste my money on this thing”? The camera seemed very sensitive to something but was not sure what it was. The problem with this technology is, no one really knows how or why it may work, and for me, I was highly skeptical of this device. I assumed I would test it, then sell it and let everyone know I thought it was useless for real investigations.

But then I started to think about it. Hmmm. I have a great relationship with the spirits in my home. They always come through for me in any way they can. If they can manipulate electronics like I 100% believe they can..and if they can manipulate words from a software app or leave full sentence EVP’s out of thin air tho my video camera, then why couldn’t they manipulate this device to show me where they are hanging out? Better yet, why couldn’t they show up and leave me an EVP to validate it is them on camera?

When I say EVP I am not talking about Ghost Box or using an APP as to me those are NOT EVP. EVP is when a voice or response to a question is recorded out of thin air, when no one else is around, making it IMPOSSIBLE to debunk. I record these ALL OF THE TIME so I figured I could test this device and ask the spirits themselves if it was for real.

What happened next really surprised me as not only did I get validation every time I used this camera, on two occasions I was left with class A EVP telling me it was them, even giving me names. WOW.

So take a look below at the four videos I have done using this camera in the past few weeks. For me, it has now been validated and I believe 100% that it CAN be used for real spirit communication and to let me know where they are. Results with others may vary as I feel a connection is required for authentic results, but anyone can achieve this connection with the right steps and dedication.

Videos are below..be ready to be amazed as I was.

The first 5 days of testing..EVP’s came in (CLASS A) basically verifying they were there..a test and attempt to debunk in my house and a cemetery visit with the SLS.

On command they come to my hand and not only sit in my hand, but tell me WHO is in my hand..this is the segment in the middle of the video after some ghost box testing…

This one is my favorite. Uncut, unedited (left in the footage with nothing so you can see exactly how it went down) and they appear on command yet again, where I ask them to

So my conclusion is that this device works for ME. It is legit and I will treasure it and take care of it the best I can. It is not a cheap device and at $1200+ it can bust a wallet for sure, but think about it. If this device IS LEGIT as I think it is..it is pretty incredible. To those who feel they have a connection to the other side, to those who can receive messages from them and to those who feel them and sense them, even see them..then this is one tool that should be used in your communications.

I ordered mine from GhostOutlet.com but I am not sure if they have anymore left. You can click here to check stock status.