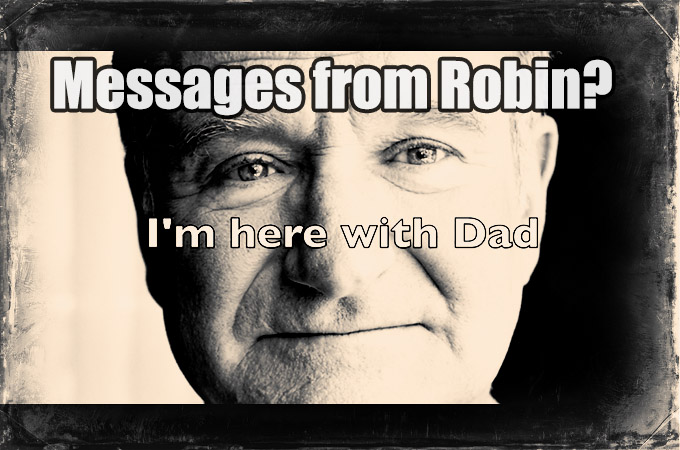 Messages from Robin Williams? Maybe, hear it for yourself.

I have been a huge Robin Williams fan for most of my whole life. I grew up with Robin’s TV show (Mork and Mindy) and all of his movies, yep, I have seen them all. I love “The World According to Garp” and “What Dreams May Come” the most but I really enjoyed all of his work. The day he passed was a sad day indeed. Later in that day I was doing a spirit box session and heard his voice come through after I asked for him. For the following week I was able to connect with, what I feel, is the spirit of Robin. Of course, it may not be but some of this REALLY sounds like him, and the last message I was able to receive about the light and being with his Dad was very emotional for me when it came in. After that last message nothing else came in. That was it and for me it sounds like he has crossed over, and I feel 100% that he has.

It was funny because as I was doing the last session when the “light” message came in I instantly smelled ONION in my room. No idea why or where it came from but it was strong. Have no idea if Robin loved Onions or what but it was there.

This video is a compilation of the messages that I feel COULD be Robin, all recorded during the week after his death.

R.I.P. Robin Williams. Always a fan. Thank you for everything you did and bringing laughter and joy to so many, even if you yourself were not feeling the joy yourself. You will always be remembered.

When watching the video below, please watch it all in its entirety as I explain a few things in the beginning. Listen closely and decide for yourself what or who came through. Me, I can not verify of course but I feel that if not all of these message, at least TWO were indeed from Robin.

Thank you all for watching, enjoy. If you liked the video, head over to the youtube page and thumbs it up 🙂 Thank you.

PS – to the three negative, hate filled individuals who attempted to leave very hateful messages that disrespected not only myself but Robin Williams, your ridiculous comments were never seen and you have been banned:) Let’s keep it civil people. NO hate filled attack comments will ever be tolerated here. Period. But I have to say, three hater comments out of over 100 comments is not too bad!

–
and below, the last interview he did before he passed away. Listen to the voice..

Over 1000 requests for this came in after his sad death at the much too young age of 26.  I use four different ITC methods to attempt to reach him, for a message. P-SB7 Radio, […]

A Beautiful Spirit Session with Angels, Love and Music. A MUST SEE. Undebunkable.

A Beautiful Spirit Session with Angels, Love and Music. A MUST SEE. Undebunkable. This one is special guys as it not only proves that spirits manipulate audio to speak, it proves we are talking with […]

Hear as this Child Enters Heaven with her Parents. Amazing VALIDATIONS.

This is one of the single most important and validating videos I have ever created, out of over 700 of them on my Youtube channel HERE. In the top 3 for sure, if not the […]