Spirits use Cat meows to Speak using the Wonder Box. How it works.

Just made a fun video showing and proving that yes, spirits manipulate audio to speak. Wether that is from a ghost box radio, an app, a geobox or wonder box or recorder they will manipulate audio given to them (for a radio it is the radio bits, for an app it is the live scan or audio bank, for a police scanner its the police scan, well, you get the idea) and form their own words out of the audio.

The Wonder Box I make today focuses on energy and helping spirits speak clearer, longer and more direct with that energy. It is all really a test, a theory, and what the spirits have told me over the years. So far all they have said to me about boxes and communication has been spot on. So I tend to listen to their requests when it comes to additions to the box.

One thing I know is that spirits who talk to me PREFER APPS WITH A WONDER BOX without question. Well, certain apps. I have now asked and recorded them picking the app several times now when I ask if they prefer a radio or app. They always say “APP”. When I go back to using radios with the box, often they will say “put on app”. This is because they need and want clear audio to work with. 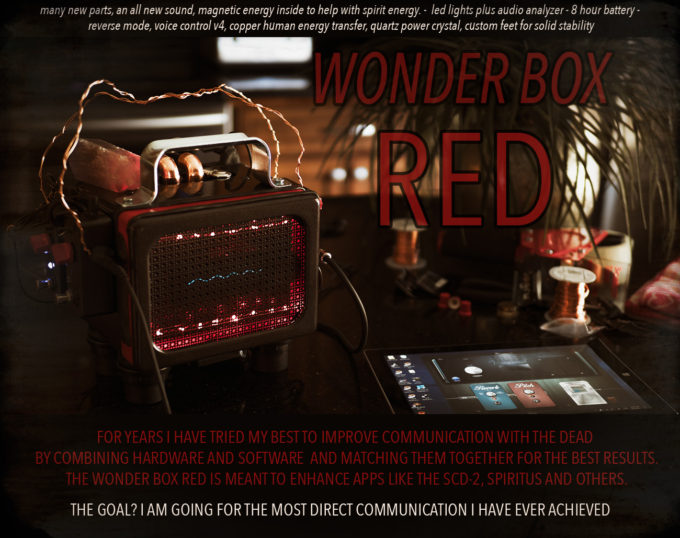 For example. In the past many thought white noise was helpful for communication. Well, it was and it wasn’t. White noise is NOT good for communication today as it truly hinders the ability for spirit to speak clearly. Gone are the days of static filled voices as ITC has moved on from this. Today we can record spirit voice speaking clearly, direct and in full sentence replies. On rare occasions, a small conversation can be obtained as well. All depends on the energy and the spirit and the operator.

But back to white noise…we used to think it helped as when we would run white noise while recording for EVP we would get voices. This is because spirits would use the white noise, manipulate it, and change it to form words. This is why EVP’s from back in the day, well, most were rough to listen to because spirits had to use noise to form words. They sounded crude, like whispers or hard to understand. This is because the audio source we gave them for their voice was NOISE.

When I helped create the SCD-1 app, I was trying to steer away from white noise to obtain CLEAR messages. So the SCD-1 was an internet radio scanner which had a clear scan and clear audio. When run a certain way, with reverb for example (that took the place of white noise with a cleaner noise) spirits could manipulate the internet radio bits and provide VERY clear direct answers. Problem was, the SCD-1 scanned too fast and too constant, which is another issues with radios. 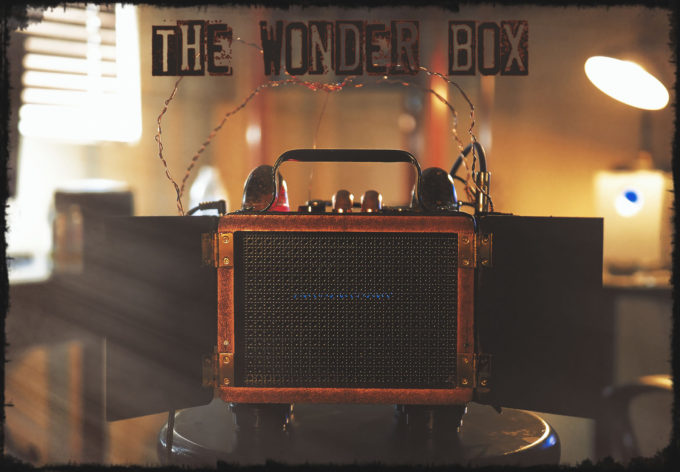 In order for us to have a small dialog with a spirit I knew we needed a clean audio source, like internet radio, but scanned in a way that was not fast or constant. Rather, if we could have bursts of audio come out anywhere from .5-3 seconds, and allow the scan to be random, even with silence at times it would then, in theory, allow spirits to choose the audio, when they wanted to and to have varying lengths at their disposal. Sounds nuts but it works amazing with the Wonder Box because when you combine both that app and the box which gives the spirits energy, it’s a winning combo once connected. Full sentence direct replies, varying voices, long pauses between replies, etc. To me, that is much better than a fast scanning radio, and trying to review for hours to pull out the messages.

The problem that most have with apps is they think what you record is what is just coming from the app, but when spirits connect through a GOOD app, that is not the case, as again, spirits CHANGE the audio. It doesn’t matter what the audio is, if implanted correctly, spirits can and do manipulate it to form words, phrases and complete interactions.

According to them they do this with ENERGY and what they call POWER.

Keep in mind, I am speaking from my experience and that is all, and I have recorded and documented it all for seven years so I have evidence to back up what I say. It’s not just me and my opinions, it is me providing what I have discovered via my ITC research.

So if you think about it, if spirits change audio to speak when the conditions are right, and the wonder box provides them the help to do that and get the conditions right, then this means when they come through and speak, it doesn’t matter WHAT the app is putting out as long as it is clear vocal audio that the spirits can work with. 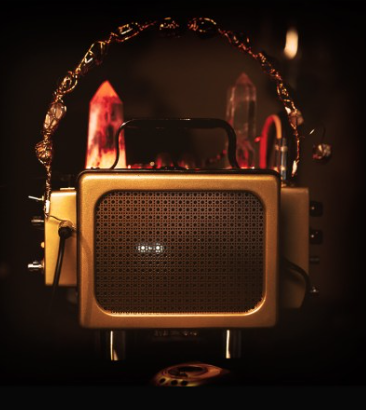 The only apps I EVER really use are internet radio scanners. Meaning, apps that scan and randomly stop on internet radio channels. THIS, for now, provides plenty of audio for spirits to speak, but I know it can get better, much better with an app into this box. As in, a better audio implementation created just for the wonder box. Hmmmm…the wheels are spinning.

The video below shows me using a youtube video of cat meows going into my Wonder Box to see if spirits will change the audio and try to use the meows to speak. If they do it, then my theory is correct and my research has proven yet again that spirits manipulate audio to speak. Radios are not needed nor are special frequencies. It’s much more simple than many think. Kind of. At least the conclusion is.

So check out the video below, it goes over pretty much what I just said and then shows a test with cart meows and then a validation with the SCD-2 fro spirits who validated they used the meows to try and speak. Amazing ; )

SO THIS my friends, is how the Wonder Box works. It gives the spirits MANY of the tools they asked for and need to get the energy required to speak more clearly and more direct. It also gives them other tools to use to improve their communication.

New SoulSpeaker session and Bellaire House updates! I have a new video up with the new soulspeaker. I am still making changes to it to try and maximize the effectiveness of the device, but it […]

Spirit says he Sees Jesus. Real Time Direct Communication you can HEAR. Hey guys! Happy Sunday to you all. I hope you guys are relaxing and enjoying this lovely day. I posted a new video […]

May 11, 2017 Group Session Comments Off on NEXT GROUP NIGHT IS TOMORROW NIGHT!! Details HERE!

GROUP NIGHT TOMORROW NIGHT!! Details HERE! Hey all! The next group night will be TOMORROW May 12th at 10PM Central Time. Just google “Current New York Time” to find out what the time difference is […]