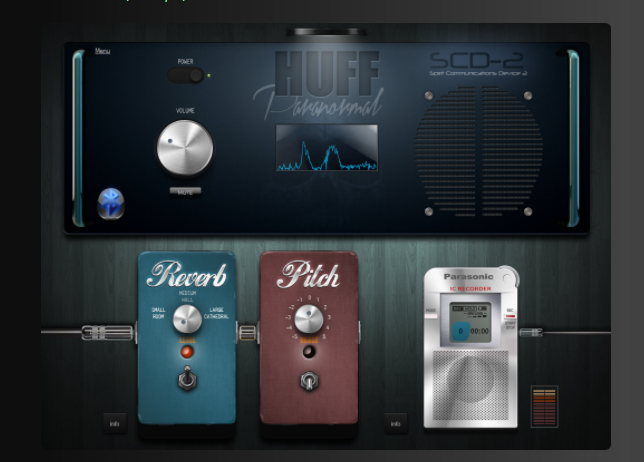 Long ago when the SCD-1 was released (two years now)?!? I already started envisioning what an SCD-2 would work like and sound like. I wanted it to be better but I was not sure if the thoughts in my head would truly work, and improve upon the original. So time went by and I tested my theories with hardware to see if it would work, and it seemed that it was and did.

One thing I have learned to dislike with ghost box’s and apps is constant chatter and scan. IT IS NOT NEEDED. Anytime I try scanning boxes or apps with a non stop flow of sounds and words it is to me, a mess. I have been after one on one clear direct communication for years, so I have spent countless hours on devices to do just that. Eliminate the quick scans and chatter.

The results have been my Portal and Wonder Box devices that are working amazingly well for true ITC.

But I wanted better still and knew that there could be software written that could be an amazing ghost box in itself but also feature some of the tech of my Wonder Box. Work great without one or even better WITH one. The new SCD-2 does incorporate things that I have found improves communication, and sometimes, dramatically.

The SCD-2 is a scanning ghost pharaoncasinos box, and it does scan internet radio in real time just like the SCD-1 but it does so in an entirely new way. When I sent Anthony the specifics of what I wanted in this app, I was not sure it would perform to the level I had wanted it to. But Anthony worked on it, day and night, and even seemed to have freaked himself out when he was close to finishing and doing his own testing with it.

See this video below of Anthony during early tests of the app:


When I saw this I assumed Anthony was pulling a marketing stunt but after I tested the SCD-2 for the first time I probably looked like Anthony did here.

I turned it off after two replies that were so scarily real and accurate, it FREAKED ME OUT a little. That is hard to do. I do not get freaked out often.

When I received the app to test, it was 11PM at night. I was in bed, Debby was in bed and we were watching TV before going to sleep.

I downloaded the app, turned it on and asked who was with me. The Answer was “ACE” which is a name that has been coming through for 2-3 weeks, a new guide to help with connections I am told. So when I heard ACE I said “WOW, that was relevant as Ace has been coming through”. I then wondered to myself “who is this ace, do I know him” and right after I THOUGHT this, the next message is what had me turn it off.

“He dates back to your childhood in Chicago”.

That was the crystal clear human male voice saying this. Now, I grew up in Chicago. My childhood was spent in Chicago. I had many friends, and some with nicknames. As I thought long and hard about all of my friends back then it hit me. One of my friends in 1976 whom I hung out with DAILY..we gave ourselves nicknames. HIS WAS ACE, named after Ace Frehley of the band KISS as we were huge fans.

Now has he passed away? I do not know as I lost contact with him many many years ago, by the time I was 19. But that message was not only relevant, it came from SILENCE and it was clear as anyone talking.

After I shut it down, I had the chills webkasino. I could not believe the only two things to come from the SCD-2 upon my very 1st power up were two scarily accurate messages.

I decided to get out of bed and record a small session. Then a couple days later, I recorded another. You can see my 1st two real tests below and what the SCD-2 sounds like.

My 1st two tests with the SCD-2

THIS is as close as I have ever gotten to a direct connection. No chatter, no scanning sounds, no radio DJ bits. Just silence and then replies. 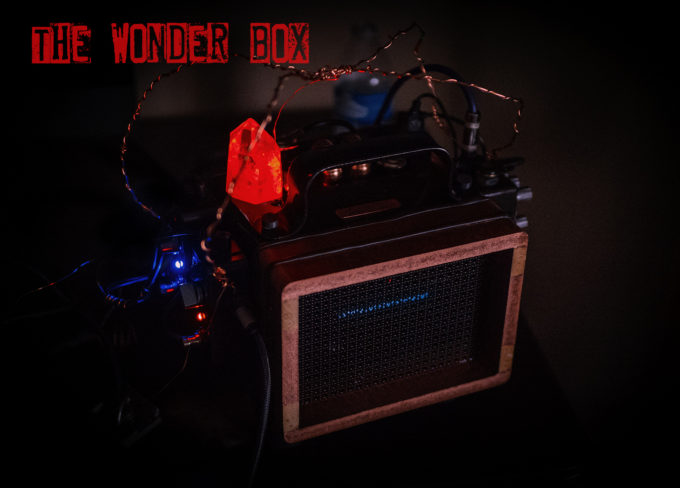 Amazing. With the Wonder Box it gets even better but a Wonder Box is not needed as you can activate the reverb and shift controls on the app and improve the communication even further.

So the SCD-2 is here and just as with the SCD-1 it is for WINDOWS only. It will not work on Android. It will not work on iOS. It will only work on Windows PC’s and tablets. There are reasons for this as the app would nit work the same on other formats. Anthony uses Windows specific features that bring this app to the next level.

In any case, it is available NOW at GhostHunterApps.com

For the record, I had the idea for this app, and the way it was to be implemented. Implementation is key as I have always said. This is why slapping a reverb pedal on to an amp will not create a portal. Implementation is KEY for apps or for a physical device. The SCD-2 in created in a way to bring forth more direct communication, so it will be silent when they are not speaking. No chatter or confusing sounds here. Just speech, and when connected, pure spirit communication.

There is nothing like the SCD-2 out there at this time. I can not wait to use it on location somewhere. I think it will be out of this world. First users are already seeing amazing replies as well, so it is the real deal.

THE SCD-2 CAN BE DOWNLOADED AT GHOSTHUNTERAPPS.COM – ONLY FOR WINDOWS OS. 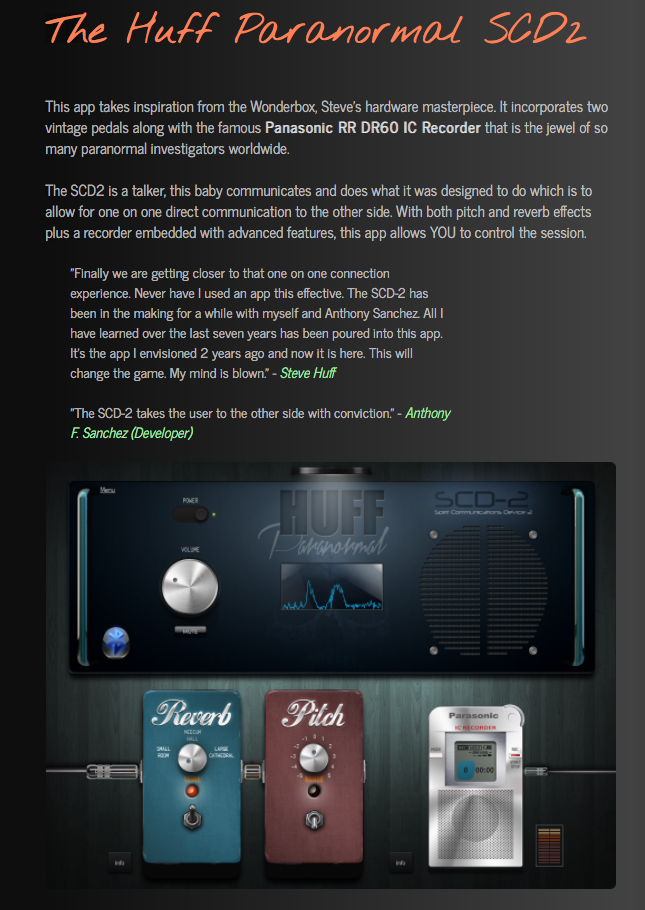 Q: What makes this different from the SCD-1 or other internet radio scanning apps?

A: The way the scan is implemented. It is set up in a way where there will not be constant chatter, and also, the way we implemented this was to make it where spirits could have a chance to make the app silent when they were not speaking. When you connect with a spirit, you will not hear radio but you will hear THEM .Clearly. From silence. No more chatter to listen through for your evidence.

Q: Will this work on Apple or Android?

A: No, this is only for Windows OS. So if you have a PC desktop or laptop or even a Windows tablet like I do (I use an older Surface 3). There are reasons for this as the app was written using windows specific features that are not available on android or iOS. Also, think of this as ITC Software rather than an app.

Q: What do the reverb and Pitch pedals do on the app?

A: I have discovered long ago that REVERB somehow helps spirits communicate. I have tested 14 reverb pedals now and use the best ones for ITC with my Wonder Box device. I am testing a new one now that comes in at $399, and it is blowing me away but we KNOW that Reverb helps. Almost all box makers use it now. I also discovered that PITCH shift helps with replies and I have tested 5 pitch shift pedals for my Wonder Box. Not all have the effect of improving communication but the one here in the SCD-2 DOES. Set it to -1 or -2 and record a session. ; ) Bottom line, both help and are part of the “ingredients” for max spirit communication using an app alone.

Q: DO I need a Wonder Box or Portal to use this?

A: No, not at all. While you will get better results using a portal or Wonder Box, it is not needed. It seems to work very well without due to some of the WB tech being implemented in the app itself. I would suggest using a speaker for clearest results though.

Q: Is WiFI needed for this app?

A: YES, as it is scanning internet radio. I have used my phones hot spot when wifi was not available.

Q: DO you guarantee I will talk to the dead?

A: NO. There are NEVER guarantees with any ITC software or hardware. But if you are connected to the spirit world, even a tiny bit you should get answers. Some will get nothing but spirit replies, others will get radio mixed with replies. The more you dedicate yourself to this, and if your heart is in the right place, spirits will connect with you. If you get results with other apps, you are in for a treat. The SCD2 is the best app I have ever used for ITC. I love other apps like Spiritus (My iOS choice 100%) and Matrix and Vortex but this is different and has a MOJO all its own. The SCD-2 is blowing my mind every time I turn it on.

Q: Do you own or own part of GhostHunterApps?

A: NO NO NO. I have nothing to do with GHA besides being a good friend of the owner, Anthony Sanchez and helping create the Huff Paranormal line of apps. The apps with my name on them are all my ideas, and implementations. Anthony is a genius programmer and takes my ideas and turns them into reality. Sometimes they work, and other times they work AMAZINGLY well. When you buy the app, you are not buying from ME, but from GHA and Anthony. He will supply you with the download links, the serial #, and support.

3AM SESSION. LOADS of direct clear ANSWERS from SPIRIT.

3AM SESSION. LOADS of direct clear ANSWERS from SPIRIT. NEW VIDEO! In this one I record a session into the wee hours of the night using a Portal Black Beauty and a Panabox. Not only […]

Spirit Box Messages from Robin Williams? Maybe, hear it for yourself.

Messages from Robin Williams? Maybe, hear it for yourself. I have been a huge Robin Williams fan for most of my whole life. I grew up with Robin’s TV show (Mork and Mindy) and all […]

I ask questions..they answer. Plus some details.. If you saw my last video and post here you would have seen I said I was taking a 2 week break from doing sessions. Well, that lasted […]