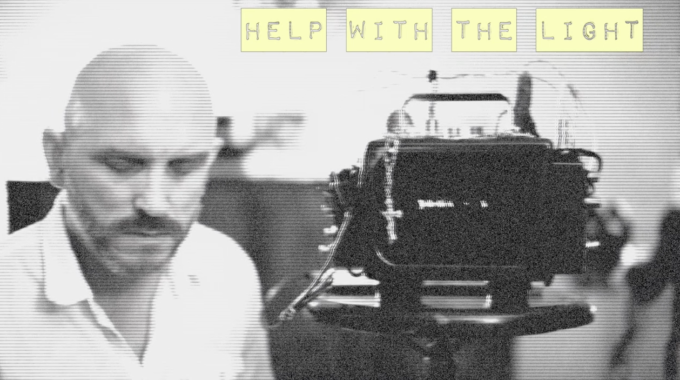 If you saw my last video and post here you would have seen I said I was taking a 2 week break from doing sessions. Well, that lasted 3 days, lol. But in all seriousness, I am indeed taking a break. In fact, Debby and I are heading to Las Vegas for the next 3 days to get away  for some fun and R&R (and we do not even gamble).

But today, while doing some work I had to get done I was thinking how direct the answers have become for me using the Wonder Box with the new MINIBOX app. I said “what if I just ask 3-4 questions, record for 3-5 minutes..would they answer me directly”?

I wanted to ask my guides if I should keep doing this work and research as since November, they have been causing some health issues and scares, and yes, it is 100% from this work, 100%. How do I know this?

Since I started testing and using the “Human Antenna” idea I have been getting a deeper connection, even now without using it. But twice now I have landed in the Emergency Room, and then ADMITTED to the hospital directly after being attacked spiritually after I completed a cross over session that gave me 100% validation that it happened.

I was warned last year and posted that video and recollection of what happened on Youtube and this website. The video is out there explaining exactly what happened. They told me clearly to NOT cross over spirits. The “They” were awful beast like entities who were indeed trying to rip me open and kill me, but i was protected by a higher power during the attack and I eventually was OK.

But time passed and I said to myself “these spirits keep asking for help, what if this is what I truly need to do”.  When Debby and I did the Hotel San Carlos visit, at the end I did what I should not have if I were to listed to the warnings…I attempted a cross over after getting asked for help. One of the last messages that came through clear as you and I talking was “you brought heaven here”.

Well, that night I was attacked worse than the 1st time but I did not tell anyone but a couple of close friends about it. It was horrific yet again, and again, I thought I was going  to die. I saw them, I heard them, and it was VERY real. Soon after I thought I was having a heart attack and Debby raced me to the ER, and I was telling her my goodbyes as she was running red lights to get me there. 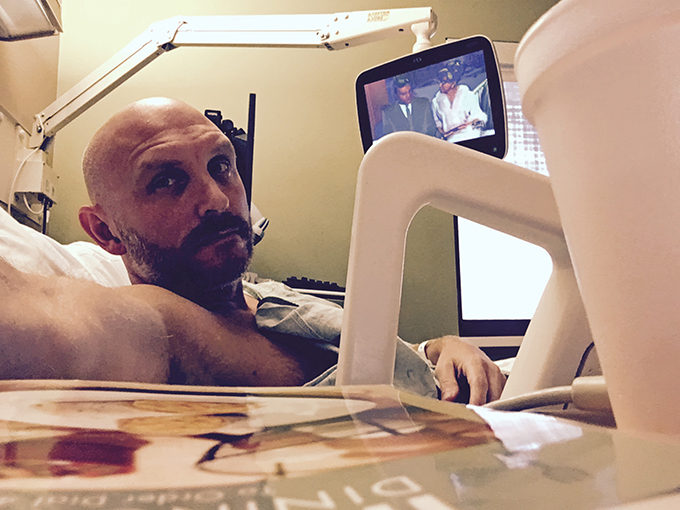 The ER immediately had me hooked up to monitors and admitted me within 5 minutes suspecting a heart attack. Now, this was my 2nd time being admitted for this after a spirit attack. Coincidence? Well after a battery of tests, the doctors said I was as healthy as I could be. Fit, in shape, no issues with my bloodwork and the heart tests showed I MAY have had a minor heart attack, yet they were not sure. BTW, I do not smoke, never have in life. I am not overweight, in fact I am at my perfect target weight.

They sent me home after 24 hours with some Nitro and other medications.

They also scheduled me for a stress test, and echocardiogram. Seeing that my health insurance is limited, I could not afford these tests right away but weeks later when having chest pains again during a spirit session I scheduled them and decided to pay from savings  ($1600 with my insurance due to a high deductible). I recently completed these tests but have not had the results just yet.

But one thing is constant. When doing sessions, daily, I start to get the chest pressure, pain and messages from the box about my heart and even them telling me they want the light “in my heart”. When I stop for 2-3 days my blood pressure drops and I feel great. So since I saw, heard and felt them during the attacks and both of those incidents led to me being admitted in the ER, I know 100% that these are having some sort of effect on my health when I do sessions on a regular basis. 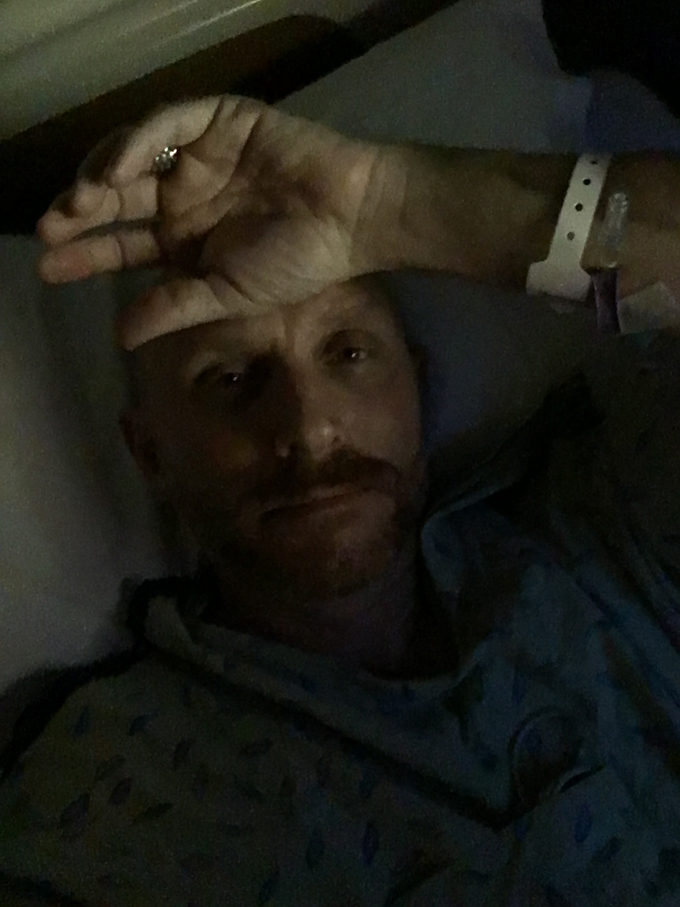 The fact is I am well-known in the spirit world. Those who do sessions all over the world get my name in their sessions, they are asked to get me or send me to them for help. On four occasions now they have told me I was CHOSEN…for what? When I ask they say “to bring the light”.

Now, I just do not know what to make of this. I never just believe what they say as we all know some lie, some can lie and some do tell the truth. DO they want me to keep going so  they can kill me? They have also said MANY times  they want me WITH THEM so I can help from THEIR SIDE.

All I know is that there is a direct correlation between what I am doing here and the chest and heart issues. They tell me, so I have audible evidence of this (and 85% of these sessions have been published for all to see). I have been attacked and have seen, felt and heard them..and it was just as real as you are sitting there reading this now. I have experienced the aftermath of doing what they told me NOT to do, yet at the same time, many ask me to do just what I am being told NOT to do.

For those that think this is a joke or made up for attention, here is my prescrip for Nitro. If you do not know what this is for, look it up. 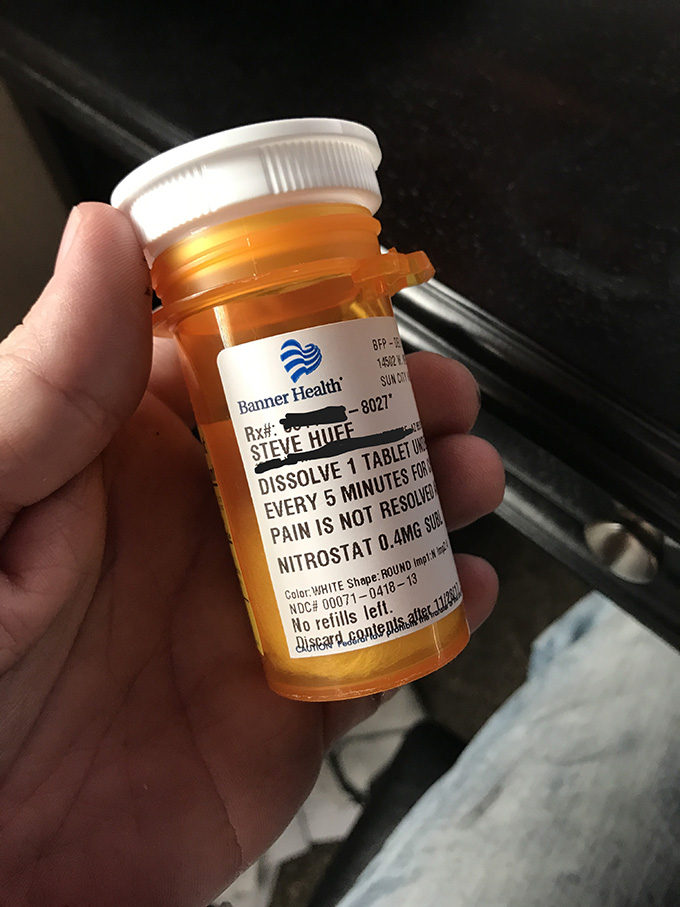 So I have to sort this, and protect myself in a way that keeps me safe and healthy.

So what I have really been chosen for? To die? To help? To what? I do not really know, I just know that this is intense, and truly scary stuff yet here I am still going, still communication, still working on ways to better communication.

Will I stop? Unlikely. But if they do end up seriously hurting me or doing more serious things to stop me, then I will. If I can keep myself protected and have no issues by cutting back on sessions, then I will forge ahead as always.

I want to stress that what I write here, and show you is for documentation. It is to show you WHAT IS HAPPENING for real not for entertainment, not for show, not for attention. It is to show the world so if something DOES Happen to me, then maybe someone will take a serious look at this and the risks of doing this work. I could maybe finally be a true documented case of which none really exist. While I hope I go on being healthy and happy, if something does overtake me anytime while doing this, at least many of you will know the true backstory of it all.

But as for now, I am still in this for the long haul. I am still happy as can be, and I have been feeling great for the last few days. NO issues. I have also only done one 3 minute session over the last three days.

This spirit communication thing is getting better and better every time but also for me, much more intense and mysterious. I also want to say that this is indeed rare and I do not think it would happen with 99.8% of others who do this work. I think I am targeted as I am so known on the other side, and for some reason I am known as a helper of spirits, a bringer of  light. This, I feel gets the attention of some not so kind entities who do not appreciate that. Again, there has been tons of audio evidence to back this up over the last 4 years on my YouTube channel.

So if you do this work I would only worry if you start to get pleas for help constantly and then warnings. If this happens, just take a step back for as long as you feel you need.

A HUGE BREAKTHROUGH! Amazing Communication without an APP or RADIO

A HUGE BREAKTHROUGH! Amazing Communication without an APP or RADIO. Well here we are again. November 2018 and another advancement within the filed of I.T.C. My latest device, the Portal Connect is different from other […]

The Panasonic DR60. A Legendary EVP Recorder. Two Reasons why you may NOT want one and HOW IT WORKS.

July 15, 2018 Discussion, DR60, E.V.P. Comments Off on The Panasonic DR60. A Legendary EVP Recorder. Two Reasons why you may NOT want one and HOW IT WORKS.

The Panasonic DR60. A Legendary EVP Recorder. Two Reasons why you may NOT want one. AND HOW IT WORKS! Hey hey hey! It’s time for another post in paranormal land ; ) Today I want […]

Inside a REAL Haunted House with the Chillseekers. Jaw Dropping Spirit Communication.