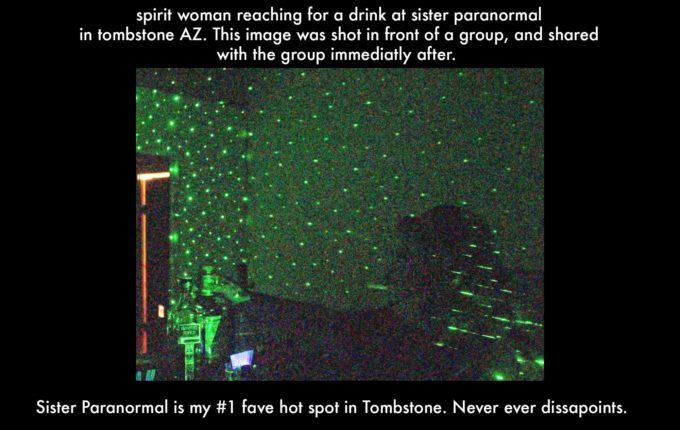 A few weeks ago Debby and I were in Tombstone to join up with a dozen or so other paranormal peeps to do an all nighter lockdown at Sister Paranormal in Tombstone. This is my #1 fave hot spot in Tombstone. Truly. For me, this old Undertakers building is the most active place in town. It never ever leaves me empty handed when it comes to astonishing evidence.

While there with a dozen or so others into the night, we were using a Wonder Box Portal and the SCD-1 (still my all time #1 REAL fave spirit communication software) and man were the spirits not only talking, they were truly interacting with us, answering group questions, playing poker, and keeping a back and forth dialog at times.

The spirits here remember me as I have been here a few times, but I was not ready for the welcome they gave me so crystal clear that the entire group heard it live..take a listen..

Not only is that incredible clip, it proves 100% that this is real, as the entire group was hearing it all live, and it went on and on and on all night like this. It shows just how effective the portal and SCD-1 combo is for true spirit communication.

In any case, it was a great night. Everyone had fun, many were amazed by the portal and SCD-1 and I was thrilled that the spirits gave us the time that they did, all night long.

At some point during the night one of the sisters, Nora, approached the middle of the bar and as she spoke aloud she offered them to take a drink if they were thirsty. She then said she felt the presence of a woman spirit to her right.

At that time I was taking pictures using a new technique I discovered years ago while on the Queen Mary (where I captured another amazing photo while no one was there, just me and security) and while I never expected to capture a thing, when I reviewed the images I was blown away by what I saw.

I instantly showed the entire group, one by one to verify that what I was seeing…others could see to. Sure enough everyone’s mouth was agape, jaws dropped and the excitement of what we saw was electric.

The image clearly shows a figure, appearing to be in some sort of black cloak, reaching for a bottle of liquor. If you click the image and see the larger version, you can see the face, which looks very odd, hair, the cloak, the arm and the hand…look at the hand!

Was taken in front of the group and instantly shown to the group, proving it is real. See, I have a theory on why this image was captured. One thing  that has been proven over and over and over is that the way spirits speak to us is by MANIPULATING (changing) raw audio we give them. Wether that is in the form of a “from thin air EVP” or using a spirit box or app or device.

Tests have been done, scientifically I may add by myself and others, to show that spirits can take words via recording and when played through a portal or similar device, spirits CHANGE The audio pretty easily to form the words and phrases they want to say.

We could feed in someone reading a paragraph from the bible, and ask questions. Answers would come through using words NOT in that paragraph but in the same voice of the person reading it. Showing that yes, they simply morph the words somehow to say what they need to say. They are not taking words from the radio and piecing them together, they do not break in a radio broadcast…but they do use the audio from a radio, an app, or any recording (even a police scanner) to CHANGE IT and say what they need.

Spirits are energy, they do not have a brain, a voice box or a physical method to speak. What has been proven by countless individuals who do this important work is that spirits do indeed talk to us this way. How, we do not know yet but we do know they also love electricity. Giving  them power in certain specific ways does indeed help them to speak and to change the audio.

Again, this has been 100% PROVEN to be factual by specific testing by myself with others in this field. So anyone who claims otherwise simply has not done the research.

So as for the photo, I said to myself “if they can manipulate AUDIO, they may be able to manipulate NOISE in an image to form their image of themselves”. So I tried this one day on the Queen Mary.

While with the Security guard from the Queen Mary, at around 1-2AM I snapped this photo of the pool using this technique I assumed may work. No one was by the pool. NO ONE. There was a group there but they were all in the dressing room. I stayed out with Security to see if I could catch an EVP (and I did) but more importantly I captured this.

I see a man at the left of the pool looking up into the room. NO ONE was there at the time. 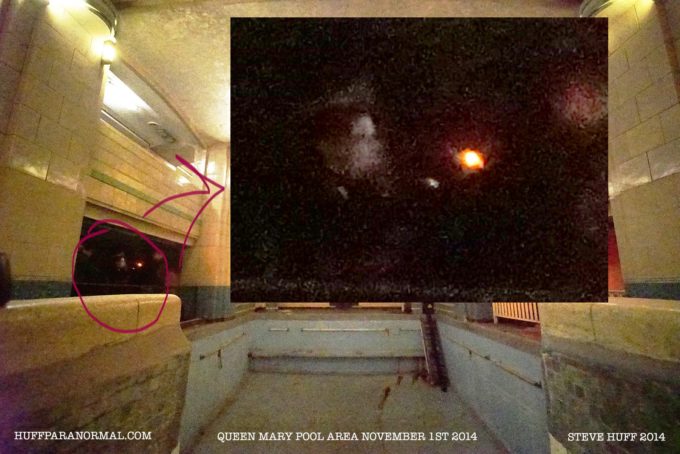 SO yes, spirits are real, they are around us and they do want to make  themselves known. There are techniques one can learn to be able to record them, hear messages and even photograph them once a connection is made.

This work and research is incredible and has opened my eyes to so many  things in life. I now know 100% that there is life after death. While I have no idea what that is like, good or bad, I do know we do go on.

I will always be here to prove that point to anyone interested in seeing my evidence. Thank you all!

Spirits talk of the Bible, Christmas, God, Love and more! Amazing Spirit Box Compilation. New video and it is all spirit communication. No filler, no talking. Amazing messages from the other side using several devices. […]

Brothers: Contacting Jason for Lee. He told him he would come through, and did.

February 10, 2015 E.V.P., Featured, Ghost Box, SCD-1, Spirit Communication, Uncategorized Comments Off on Brothers: Contacting Jason for Lee. He told him he would come through, and did.

Brothers: Contacting Jason for Lee. He told him he would come through, and did. A special session for two brothers… So last night I recorded a session with some astounding validation. I was on my […]

Spirit Box Session – 9/4/2014. Joan Rivers? Sounds like it to me. Wow. Just when I was getting over my intense feelings from the Robin Williams sessions I sit down to do a quick session […]