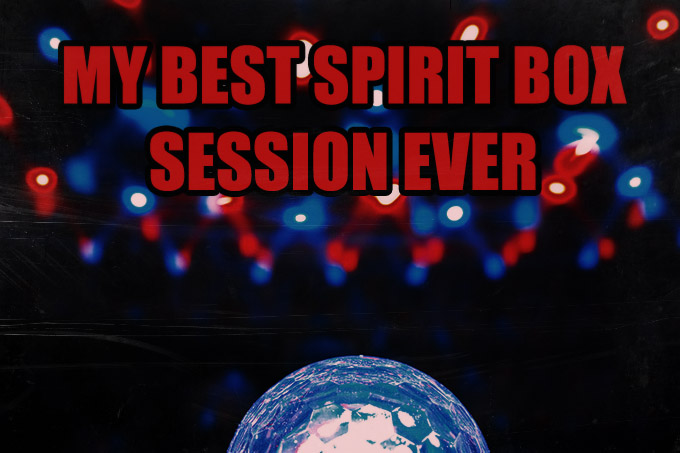 The veil is lifting. My best spirit box session ever.

So one day after the Group Session #7, that I was personally not 100% happy with due to buzzing noises, interference, and some footage that ended up not being recorded correctly (no audio) I did another session. This time it was for a group of three, something I have never done before. I have done a session for one person before and of course the group sessions but never for 3 people. It was an experiment that I did and had no idea how it would go but I was excited to give it a go.

After going through the video and audio I started to realize that this session was jammed packed full of replies, messages and responses. All were very clear and there was no interference that affected the results. In fact, there were so many replies I started to wonder if many of these were still coming through from the night before, for the group.

The three I did the session for has not gotten back to me yet to see if anything came through for them (though one of their names was mentioned) but either way, it was a pretty incredible session. I have been doing this for four years now and it seems that every year I get clearer and cleaner responses, like a veil is being lifted from our world to theirs. I am either getting better at what I do, or the spirit world is being more trusting of me. Last night I had energy surges through my body that were intense. In the beginning of the session before I turned anything in I audibly heard with my own ears two EVP’s, and the recorder caught them. Those are NOT in this version of the video as I conduced it down to remove info of the three who participated. Even so, I knew from the get go that it was going to be a good night for communication.

It was storming outside (but it was also storming during the group night) and I felt comfortable and in a sort of zone. I felt connected more so than the night before.

Over the past three years I have had over 3500 requests for private sessions. I have been offered up to $500 for a session. I turned them all down. Why? Because I was never really sure if what was coming through was actually a spirit for the person. I never wanted to mislead anyone, which is why I always state that there are no guarantees for group night. It is also a moral thing. I could lie like so many out there and make up stories about what I do and charge $300 per session but that would be wrong and I am not a guy who likes to mislead anyone, ever.

The latest video is below, which I feel is one of my best yet for spirit box replies and clarity. Boxes used were the Mini Box, MiniBox Plus & Andy’s Box.

The Ghost Box Realm from GhostHunterApps.com. My thoughts and Evidence. (I have included videos here of me using the GB-REALM throughout the post so you can see it in action) You can buy the GB-REALM […]

This New Spirit Communication Device is Miraculous. Hello again everyone! Just wanted to share my latest video with you guys as I have been working on a new spirit box that is one where I […]

The best Ghost Box for Beginners and a Demo using it!

July 29, 2018 SOULSPEAKER, Spirit Box, Spirit Communication, Talking to the Dead Comments Off on The best Ghost Box for Beginners and a Demo using it!

The best Ghost Box for Beginners and a Demo using it! By Steve Huff First off, THIS IS THE BEST GHOST BOX KIT for beginners. Period. The P-SB7 has been around for a long time […]